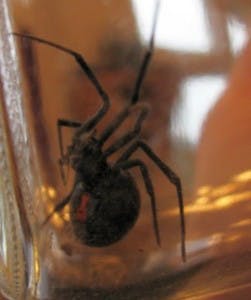 The BLACK WIDOW spider… one of the most notorious spiders. The star of many a horror movie. The deadliest and scariest spider in North America… right?

The following are facts about the Black Widow spider found in North America (Latrodectus hesperus).

Female Black Widows are probably one of the most recognizable spider; plump black abdomen with a red hourglass on the underside (NOT their back! and sometimes it is simply a red spot). They can grow from 0.5 – 3.5cm in length and live one to three years. Like all spiders, they are efficient predators and have a sticky web and venom to catch prey. The silk of a Black Widow is one of the strongest of all spiders but does not make the prettiest web. One of their nick-names is the ‘tangle-web’ spider. The venom of a Black Widow is very potent and causes immobilization and death in any small prey.

Black Widow spiders are actually quite shy and avoid conflict at all costs. Females will set up a web in a comfy spot and never leave that area for the rest of the warm season (unless the web is destroyed somehow). Their life consists of weaving silk, and sitting, fat and lazy, waiting for bugs to wander into their web. Males are small, brownish, and have venom that is harmless to a human. They are the ones who wander around looking for females to mate with, so if you see a Black Widow you might not even recognize it. When you see Black Widows walking around in the movies, shake your finger at them, because that very rarely happens!

Black Widow venom is said to be four times more potent than a rattlesnake’s but is always injected in smaller doses. The venom is a neurotoxin, mainly latrotoxin, which can cause muscle pain, nausea, and make breathing difficult in humans. But like all toxins, the effects depend on the individual spider and person. Similar to an allergy to bee sting venom, some people can react very badly and require hospitalization, but some people report it feeling as painful as a wasp sting with no lasting effects. A bite could only be deadly if a person was very young, very old, had a compromised immune system or were unable to get to a hospital for the antidote.

There are many species and subspecies of Black Widow found around the world. The Western Black Widow is found from BC to Alberta and south to Mexico. They are more common in warmer climates, but can be found in many places (including Vancouver Island). Females prefer to live out of direct sunlight in places such as woodpiles, outhouses, or under rocks. There has never been a medically recorded case of a human death from the venom of a black widow in North America.

Remember that most stories about Black Widows are just that… stories.

So… DON’T WORRY! Hopefully this helps put your mind at rest.

Rule to live by: if you see a messy, tangled web, do not stick your finger in it and you will be fine! You, your family, or your pets do not have to fear the Black Widow. When they are left alone, they leave you alone!

(photo of female Black Widow found in Victoria, BC)