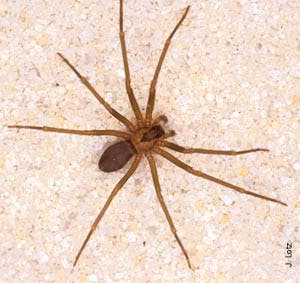 The Brown Recluse spider has spawned many myths and horror stories over the years. We are here to clear the air about this small, misunderstood spider.

Brown Recluse spiders (Loxosceles reclusa) are small brown spiders native to the central, south United States and Mexico. Unlike what many rumors suggest, they ARE NOT found in Canada or most of the USA.

These spiders are light to medium brown, with a darker line down the cephalothorax (head) shaped similar to a violin. Their nickname is a Violin or Fiddle-back Spider. The Loxosceles genus of spiders have three pairs of eyes instead of the four pairs typical of most spiders. Their leg span can be up to 20mm and usually live one to two years. Brown Recluse are very resilient and can go long periods without water or food. They are nocturnal hunters and spend days in their messy webs. Because they are a small, generic looking spider they are often confused with other species. One scientist who was studying these spiders asked the public to bring him specimens of Brown Recluse. Out of almost two thousand spiders from 49 states, less than 20% were actually Brown Recluse. This shows how common mis-identification is with these spiders.

Brown Recluse spiders do have a strong venom to help them catch and kill prey larger than themselves. The venom has necrotic properties that can cause the flesh around the bite to not heal. This leaves the bite area open to infections that can make it much worse. Less than 5% of all bites get bad enough to require surgery/skin grafts and most bites go away after no more than a red spot. Many doctors mis-diagnose other skin conditions as Brown Recluse bites because of miscommunication and improper teaching. One scientist explains the high number of medical conditions blamed on spiders as, “If you get a bacterial infection, do you tell anyone about it? Of course not. But if you think you got a brown recluse bite, you tell everybody! You put it in your Christmas letter.”

Remember, they are called a Brown RECLUSE for a reason! Like many spiders, these ones avoid interaction with humans whenever possible and are nocturnal. They can be found in many human dwellings simply because there are many small invertebrates to eat there. There are dozens of stories where families find many recluse spiders living in their house and even after years of co-habitation never have a single bite. Like all spiders, they would only bite if provoked.

Arachnids in general have been the basis for many stories based in fiction. Brown Recluse spiders are one example of a generally well behaved spider being buried under a pile of false information. Even if you live in an area where they are common, you need not worry if you leave them alone!