Gynandromorphic insect – half female and half male 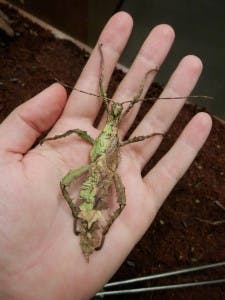 In nature, sometimes animals develop with half their body female and half male. This phenomenon is called gynandromorphy. Many times, these animals are split completely in half with a clear distinction if the genders are dimorphic. It has been seen in quite a few animals, including insects and birds. Scientists believe it usually occurs in early embryonic development where some important developmental cells code for male features and some for female.

Malaysian Jungle Nymphs (Heteropteryx dilatata) are a type of very large stick insect from South-east Asia. The Bug Zoo has a juvenile who is split down the middle, half male and female. The adults of this species are completely sexually dimorphic and different sizes and colours at maturity.

We do not know what will happen as the juvenile grows, but no matter what it is wonderful to see this amazing, unique animal!