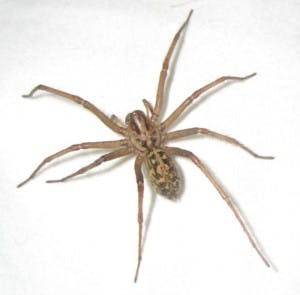 If you live in British Columbia or Washington State you have probably seen a large brown spider in your basement or stuck in your bathtub. If so… you have met the Hobo Spider.

Hobo Spiders (Eratigena agrestis, formerly Tegenaria agrestis) are found around the Pacific Northwest. They are native to Europe and were introduced to the Seattle area in the 1980’s. Hobo Spiders prefer to live in humid, dark environments and are thus, often found in human dwellings. (In their native Europe, they are rarely found indoors because of competition from other spiders.) They are in the Family Agelenidae, and spin horizontal funnel shaped webs for catching prey. The many threads of silk inside and outside the funnel transmit vibrations of potential prey to the spider who lives deeper in the funnel.

Hobo Spiders are fairly large, with a leg span up to 5.1cm, are brown in colour, and have eight clumped eyes. Their legs are uniform brown without bands and are sometimes hairy, and their abdomens have darker chevron or line markings. They have been known to live one to three years. These spiders have good eyesight and are very quick. Their speed is often what startles many people who encounter these spiders.

It is easy to identify male and female Hobo Spiders. Males have bulbous pedipalps (appendages near their mouths), that are used for mating. Sometimes it looks like they have small brown boxing gloves near their faces. Females usually have larger bodies than males. During the breeding season, males will wander around, searching for females who stay in their webs. This is when they are commonly found indoors (end of Summer into Fall). Females will lay an egg sac suspended with silk and the eggs will overwinter before hatching in the spring.

There is quite a bit of professional disagreement when it comes to Hobo Spider bites. It was thought that the Hobo’s venom caused necrotic lesions similar to the Brown Recluse (whose range is strictly South-Central USA). Recent research has not shown any evidence for this and the venom seems to be quite mild. Many bites do develop into itchy wounds and can cause headaches but about 50% of Hobo bites show no symptoms except slight swelling and itching. (Also, when a bite gets scratched enough to break the skin, the area can get infected, which makes it seem much worse than it really is.)

Do they bite? Like all animals, spiders will defend themselves when they feel threatened. Females can be especially protective of their eggs or young. As long as the spiders are mostly left alone, you do not have to worry about them biting. It can be beneficial to have Hobos near your house because they will eat other spiders and insects including the pesky silverfish.

If you do find them in your house and wish to show them the door, the easiest way is to place a cup or bowl over the spider in question. Then, take a piece of paper and slide it underneath the vessel. You can transport this outside to a spider friendly area.

Contact us if you have questions, concerns, or have a large specimen!