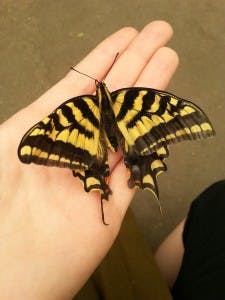 This is the tale of a Western Tiger Swallowtail butterfly (Papilio rutulus).

In the summer of 2014, a little caterpillar hatched out of his egg. He decided to eat what was left of his egg because he was hungry. He continued to eat all the tasty leaves he could find and grew larger and larger. Once he was a few weeks old, he was almost 5 inches long and hundreds of times heavier than when he first hatched.

This fat caterpillar happened to live on a tree in down town Victoria, BC. One day, he accidentally fell out of the tree and landed on the busy side walk. A kind human spotted him and put him into an empty coffee cup. And that is how this lucky caterpillar found his way to the Victoria Bug Zoo.

He was an incredibly large and beautiful caterpillar, so the Bug Zoo put him into a container with soil for the night so everyone could look at him before he went back outside. That very night, the caterpillar decided it was time to pupate (become a chrysalis). His outer skin turned brown and tough and he got ready to sleep and change. Caterpillars like him can spend months as a chrysalis, slowly changing their form and waiting for the spring. He was placed in a mesh container to wait… and wait… and wait… We waited so long we almost lost hope for the little guy.

On a warm summer night, the caterpillar emerged from the chrysalis he had spent a full year in! But he was a caterpillar no longer… he was a beautiful yellow Swallowtail butterfly!

We released him later that day and now, if you are in Beacon Hill Park in Victoria BC, you might just be lucky enough to see this lovely boy (or his offspring) flying around!.